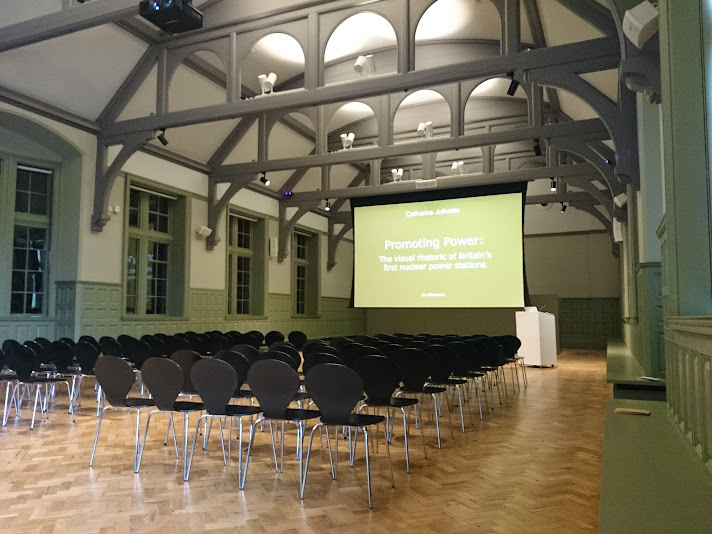 Waiting for the talk to begin in the newly refurbished Grand Hall in the Whitworth. The Whitworth seems to have a deal with Little Green paint company, whereas Manchester Art Gallery is sponsored by Farrow and Ball. Both institutions provide helpful notices showing the name and number of the paint chosen for each space in the gallery, should the visitor want to replicate it at home. I have to admit to being drawn into this, adding the mushroomy brown paint called Attic II to my dining room wish list – how hatefully bourgeois! There are so many tasteful chalky tones here the decorator seems to have been let loose with a paint chart and a credit card. Or perhaps they were just using up all the odds and ends from the rest of the gallery. On a less self indulgent topic, the talk was by the excellent Catherine Jolivette on her work detailing the visual rhetorics of nuclear power. She detailed her fascinating archival research and revealed, perhaps most surprisingly that the British nuclear industry commissioned a heraldic coat of arms to be designed featuring uranium rods, waves of heat and power, and two red pantheons. 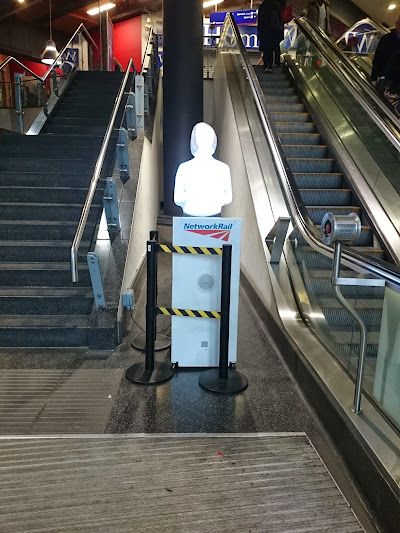 This image and the two below, map what I think is an emerging trend: the replacement of actual people with images of people. This ghostly apparition, complete with hazard barrier, appears between the escalators at Manchester Piccadilly station. Her ghostly voice is doomed to incessantly repeat a premonition about the dangers of carrying luggage on the escalators rather than the lifts. 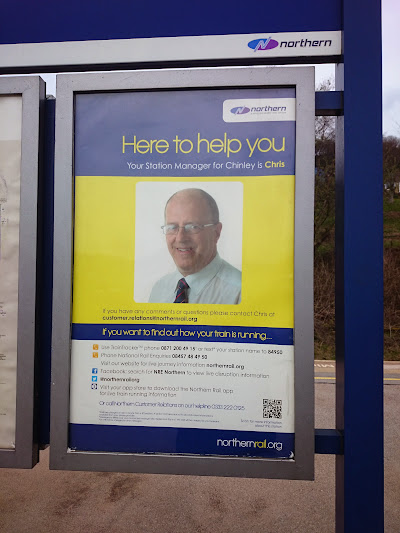 Here is Chris. Chris is [NOT] Here to help you. In the parlance of Northern Rail, Chinley is what is referred to as an “Unmanned” station. This might sound like its had its balls cut off and in effect this is not too far from the truth. Until the late 1960’s Chinley was a sizable interchange with multiple platforms, a station house and a waiting room with an open fire to warm the extremities of frozen passengers. Now it is a strip of concrete with a plastic shelter at one end, where during the day you are lucky to get a train every two hours. There is no ticket window, there is no ticket machine, there is no body. But there is a picture of Chris, looking over us like the benevolent patron saint of disgruntled commuters. 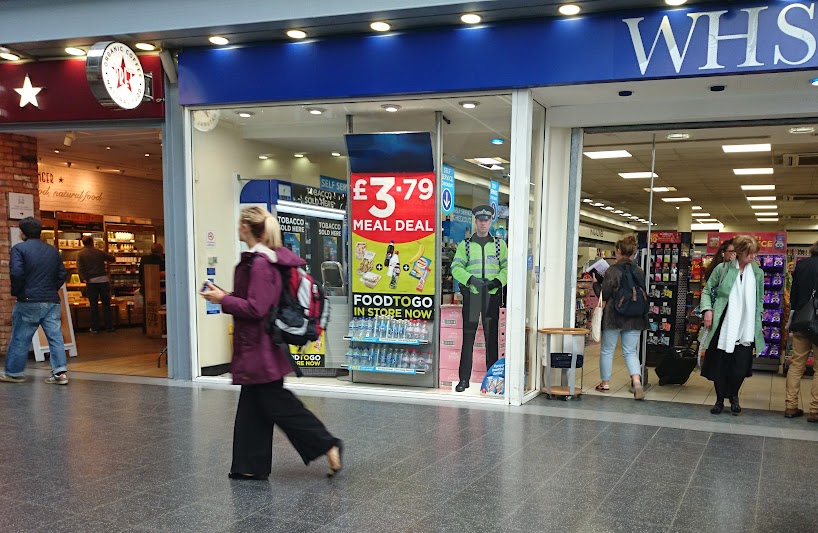 This tendency could be related to Will Self’s term the “skeuomorph”. According to Self this refers to a once-functional design element repurposed to be purely decorative. In his column for the New Statesman he highlights Virgin Trains snack boxes which are printed with a trompe l’oiel effect wicker basket – a material originally used to allow air to circulate around the packed goods inside whilst still being strong and lightweight. Also the packaging of Chicago town frozen pizzas which mimics in print, the corrugated cardboard used to strengthen pizza delivery boxes. Here we have a skeuomorph policeman, a sign, a simulation, a once functional but now outdated design feature? 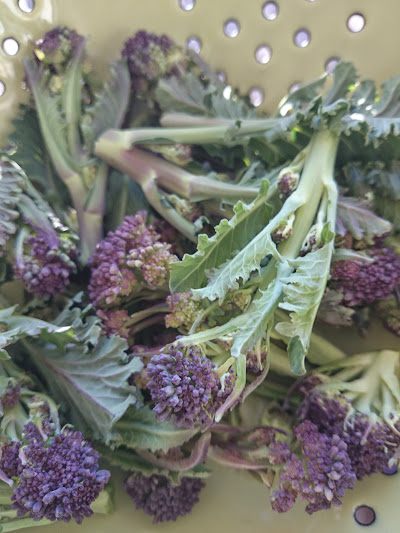 The first harvest of psb. 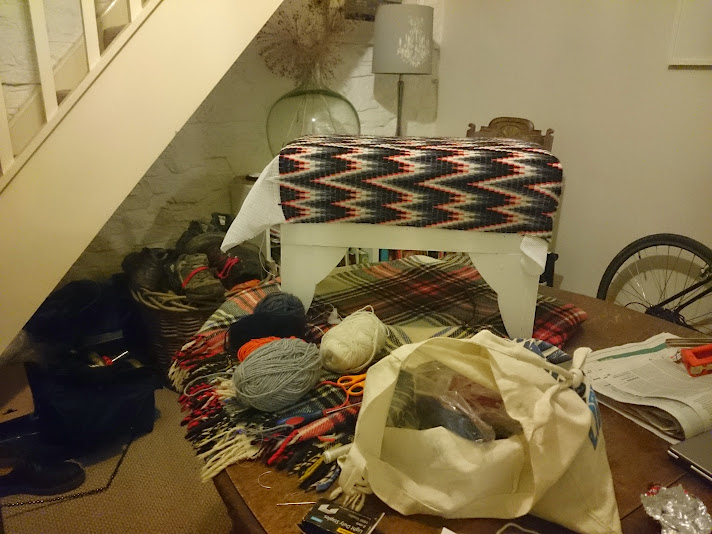 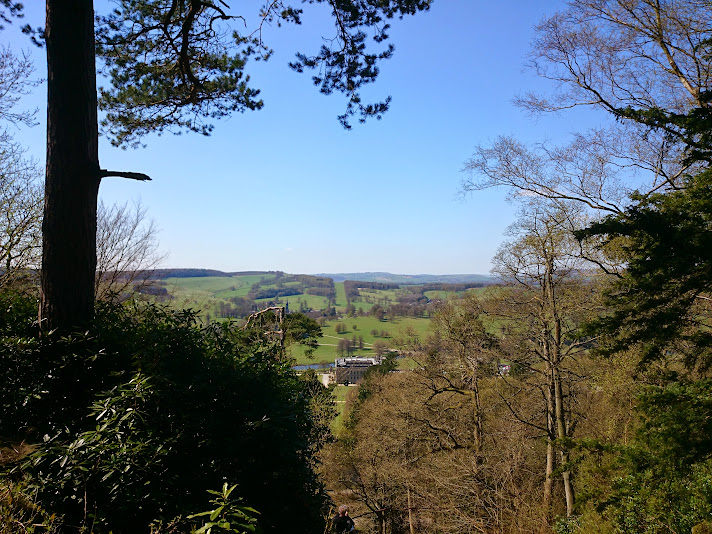 Chatsworth from above. The various Dukes of Devonshire have really messed this landscape about. This image is taken from near one of the many lakes which were hand dug by peasants to enable the water to cascade down to the house and build enough pressure on the way to create out in an enormous fountain, built in anticipation of a visit from the Russian Emperor, who never bothered to visit. Other fun facts: At various times the Dukes have moved a village so it would not be in their eye line, moved a river, built a hill, landscaped a channel of green through woodland in order to create a pleasing perspective and planted hundreds of trees to form the letters ER in honor of the Queen. You’ve got to love the royals (hmmmm). 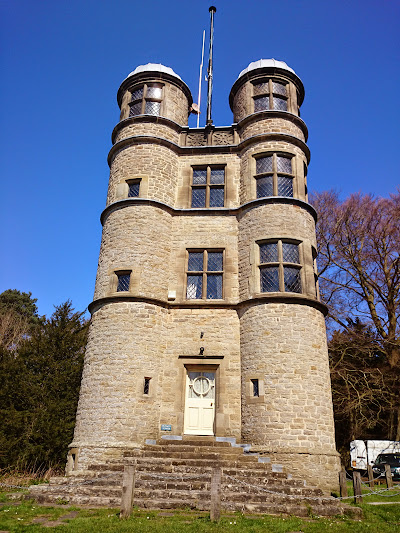 Also on the Chatsworth Estate, the Hunting Tower. Built by Bess of Hardwick a long time ago, this lodge is a bit of an optical illusion. From down below at Chatsworth House this tower looks huge, as if you can only see the top of it poking through the trees. Up close you realise that bit you saw poking out is actually all there is to it. Another fun fact: you can rent this property as a holiday let this summer for £1759 per week – sleeps 4.