View from my hotel window in Paris. The shutters make it seem so continental.

My colleague Simon and I were “supervising” a student trip with this bunch of amazing MMU Art History and Fine Art and Art history students. Here we are at the Pompidou Centre, just before an epic falafel eating session – followed by the Jeff Koons retrospective. 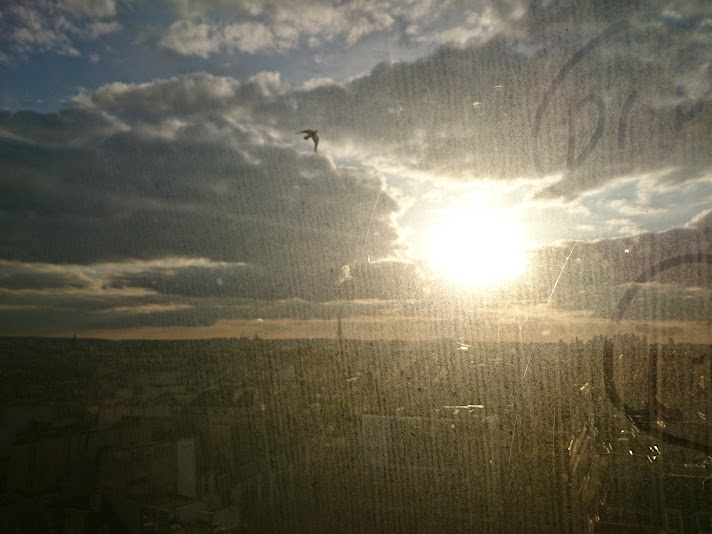 Dusty view of the city from the top floor of the Pompidou. Can you see the Eiffel Tower?!

I love how the curve of the plastic tubes on the outside of the Pompidou give the city a distorted look. In the distance the Sacre Coeur, in the foreground les boulevards. 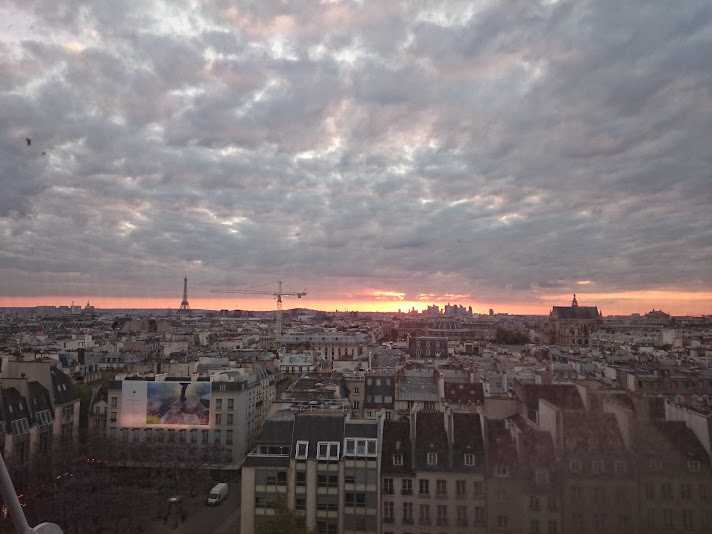 Day one of gallery visits: Musee d’Orsday. I have recently written an essay about the figure of the peasant in modern art, so was especially looking forward to seeing Millet’s iconic peasant paintings. As you can see I was not alone in this desire. Many of the major museums in Paris are closed on Tuesdays, the d’Orsay however is open, meaning that everyone goes there. This is where I first encountered the practice of having one’s picture taken in front of famous paintings. This it seems is THE thing to do. You actually stand there with your back to the painting, you do not look at it, looking is for losers, get your picture taken and move on.

The Musee d’Orsay is housed in a spectacular former railway station, the restaurant is situated behind the clock. This is where I remembered that everything tastes better in France.

Browsing in the bookshop of the Jeu de Paume gallery I came across a French version of one of my my favourite childhood stories, “Owl at Home”, featuring “Tear Water Tea”, which I often think about. The central character Owl, decides to make tear water tea, so he has to think sad thoughts and cry into the tea pot, one of the things he thinks about is all the tea spoons that have been lost forever behind radiators .

The history paintings in the Louvre are amazing and so very very large. Here’s a fragment of Napoleon crossing the Alps. 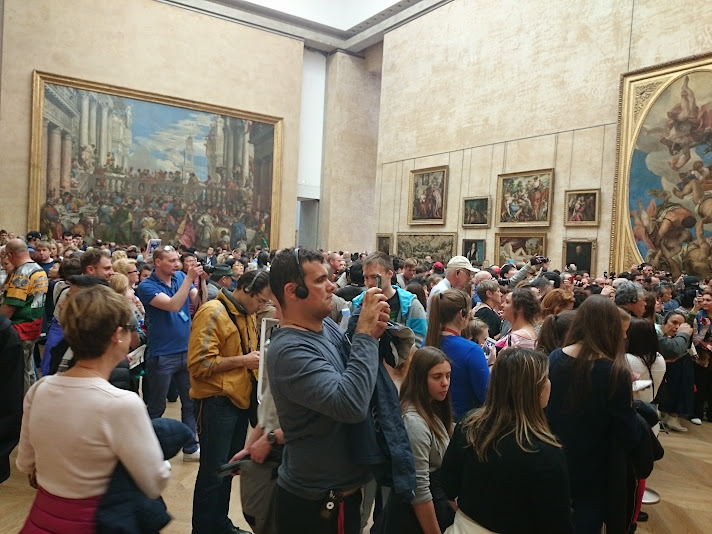 Can you guess what all these people are looking at?

Napoleon III apartments in the Louvre were insanely opulent. Every time I took a photo of a huge chandelier I walked round the corner and there was another even bigger one.

See what I mean? 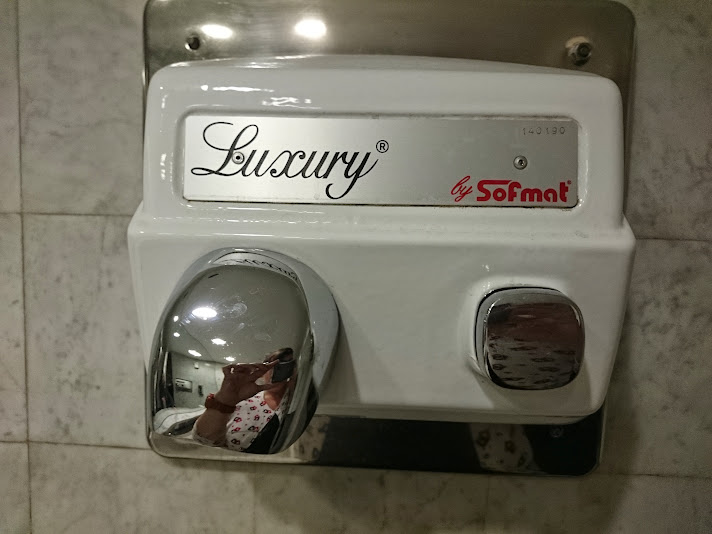 Meanwhile in the public areas of the Louvre, luxury has a slightly different meaning. 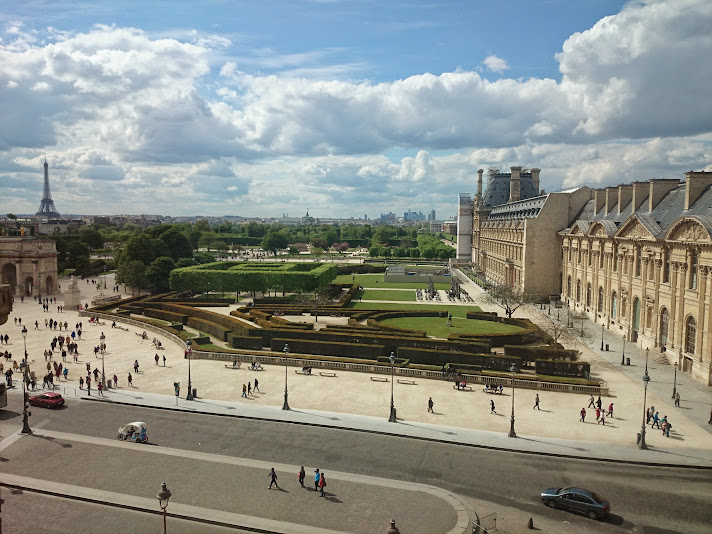 How can this place be real?

La Fee Electrite is an enormous mural painted by Raoul Duffy for the Paris Exposition Universal in 1937. It shows the fairy of electricity gliding over society spreading light and progress. Almost the opposite of Walter Benjamin’s Angel of History who flies facing backwards surveying the chaos and destruction left in her wake. I was excited to see this artwork, which was commissioned to celebrate the social advancement of electric lighting, as I will be investigating the connections between electricity and art in a number of upcoming projects, most imminent of which is my research fellowship a the the HMI.

This set up at the Musee d’Arte Moderne de la Ville de Paris is so elegant, I could picture myself in an office like this!

Every time you look out of a window or exit a building there it is! Glimpses everywhere, it reminds me of Jaques Tati’s Playtime where it is never shown directly put appears in fleeting reflections in the new plate glass Paris of the 1960s.

The Education space in the Palias de Tokyo. Oh my GOD! This installation by Henrique Oliveira is amazing. I would also like to add that those rugs on the floor – I used to have one of them in my kitchen – oh yes ahead of the trend. 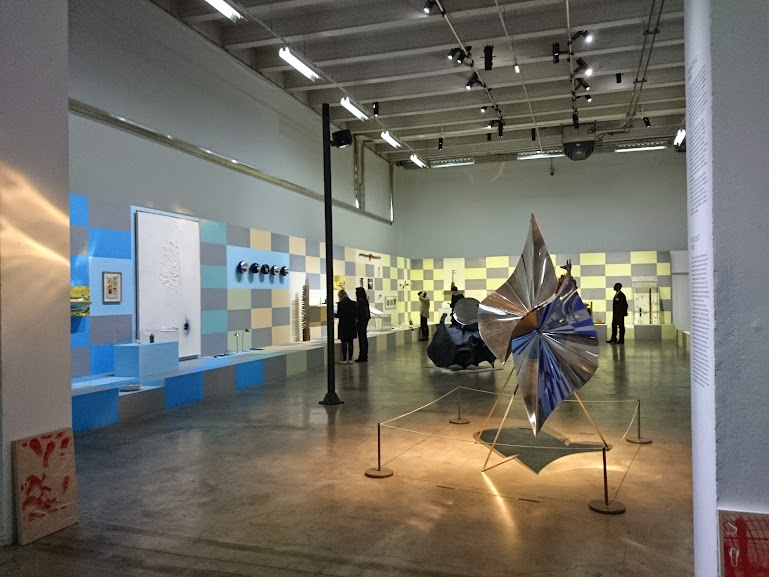 This was a phenomenal show at the Palais de Tokyo called The Use of Form. It was an eclectic mixture of crafted and everyday objects that were arranged in such a way as to create unusual connections between them and make the viewer see them differently. The curation was at first really complicated and overbearing. The whole space was painted with a checker board pattern which changed colour to indicate a different concept or section. Each object had a number which corresponded to a text in a broadsheet booklet that visitors needed to consult religiously. However once you got into the rhythm of the space and the interaction between exhibit and booklet it became compelling and fascinating.

the name of the excellent cafe at the Palais de Tokyo made me laugh every time I saw it.

This was a fun evening for me. I first went to what I now learn is the “legendary” Chartier restaurant in 1996 when I visited the city with my degree course. This time I had the pleasure of taking my students to sample its delights.

Last day, and on my fourth visit to Paris I finally make it to Sacre Coeur. 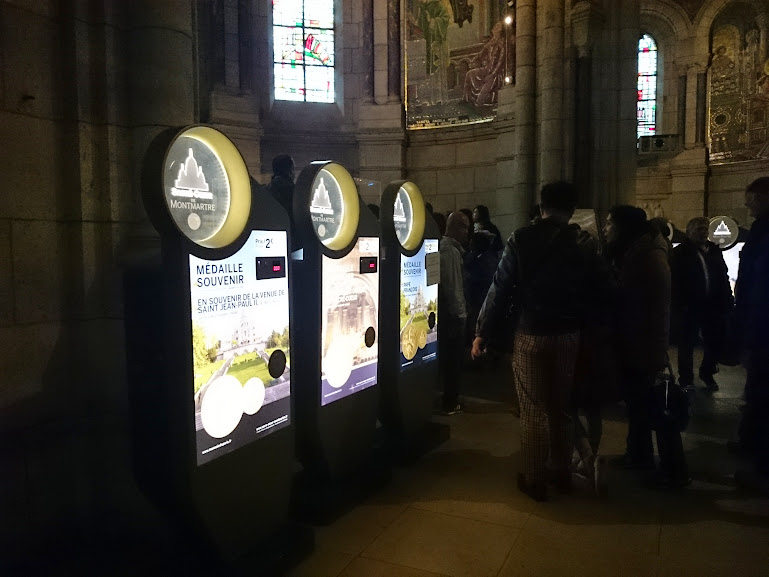 Inside was so strange. A man periodically said ssssshhhhhh SILENCE! into a microphone. One noise that was apparently acceptable was the sound of coins dropping into the illuminated machines, looking strangely like robot nuns. They dispensed souvenir medals, like pilgrim badges of old.